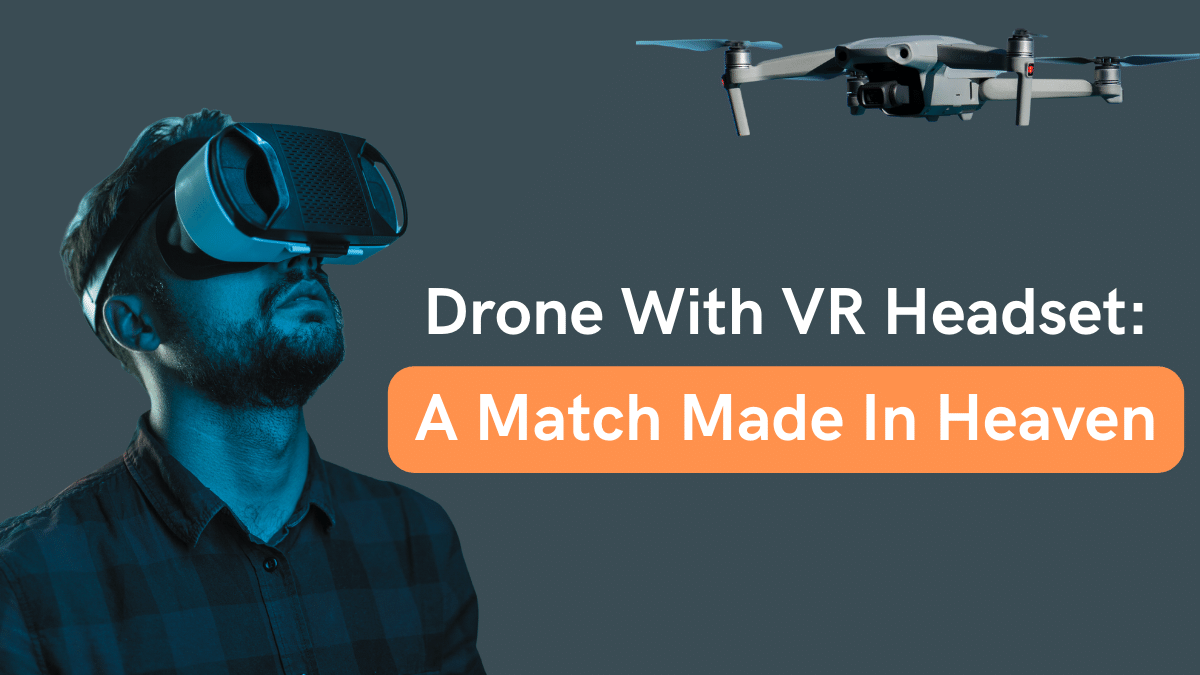 Having both a drone and virtual reality headset gives you an immersive experience like nothing else. You’re able to feel like you’re actually in the middle of all of your surroundings, which can be quite breathtaking in itself. Of course, you’ll need the right drone and the right VR headset to get the best possible experience, but it’s definitely worth it when you’re done!

Remember when I talked about drone detection apps and if they actually work? Well, in this blog post, I will be covering why having both a drone and VR headset can lead to better experiences overall and how having them both together changes the game entirely!

Why You Need a Drone With VR Headset

Drones are becoming increasingly popular and for good reason. They offer a unique perspective that can be used for photography, videography, and even scouting. But what if you could take your drone experience to the next level? That’s where a drone with a VR headset comes in. Just strap on your headset, connect it to your phone or tablet (there are many free apps available), and enjoy virtual reality from the sky!

Fly around anywhere from beaches to forests to snowy mountains. Be one with nature while exploring landscapes as never before. Get an up-close look at any animal as they go about their day in their natural habitat (you may find out something new about these creatures that you didn’t know before).

The 360-degree video capture option is perfect for showing off landscape views at weddings or other events. The ability to fly closer without crashing into anything offers a more immersive experience than ever before. And of course, there are plenty of games to play too. There really is no limit to how this technology can be used.

Let’s highlight some reasons why having a drone with a VR headset is an entirely different experience altogether:

So if you’re up for it, grab your drone and explore the world in a whole new dimension!

How to Fly A Drone With A VR Headset?

Flying a drone with a VR headset is an amazing experience. It’s like being in the cockpit of a real airplane. You can see everything that’s going on around you and it’s very realistic. The only downside is that it can be a little bit overwhelming at first. But once you get the hang of it, it’s really fun! Here’s how to do it.

Steps To Connect Your VR Headset To Your Drone

The best part about flying a drone with a VR headset is that you don’t need to look down to see the controller because your hands are resting on the controller already. All you have to do is tilt your head in the direction of where you want it to go and press the corresponding button. All in all, flying drones with VR headsets makes for an incredibly immersive experience and gets easier every time you try it.

Check the instructions below on how to safely land your drone if things don’t go according to plan.

How To Safely Land Your Drone With VR Headset

Flying a drone is a fun and exhilarating experience, but it can also be dangerous. That’s why it’s important to know how to safely land your drone with a VR headset. Here are seven easy steps to follow:

Congratulations! You’ve landed your drone with a VR headset in a safe manner. Now go have some ice cream, because you deserve it! By doing all of these things correctly, you should be able to safely land your drone every time while wearing a VR headset.

Can You Use VR Headset With Any Drone?

Any drone that is compatible with a 3DR radio can be used with a VR headset. All you need is the appropriate cable to connect the two devices. These cables are available for purchase from your local electronics store. Make sure you have all of the necessary components before you get started because once they’re connected, it’s difficult to separate them again.

Yes, the DJI Mini 2 supports a VR headset! Here’s how it works:

Simply put on your VR headset and connect it to your controller. Then, launch the DJI Fly app and you’re ready to go! The app will give you a first-person view of what your drone sees, and you can even use the joystick to control the camera. It’ll be like you’re actually up there flying!

A few other great features are that the goggles support phone screens up to 6 inches in size and they have a focus adjustment knob so you can customize them to suit your vision needs.

One thing that could be improved would be if they came with more than one set of foam inserts because some people may need different sizes depending on their eye spacing. This is definitely worth considering as an option for anyone who wants a fully immersive drone experience!

The Best Drones To Use With A VR Headset

Here are some of the best drones for VR headsets:

The Syma X5C Explorers 2 Camera Drone is perfect for beginners who need something cheap and reliable. It’s also one of the most affordable drones on this list. For less than $54.99, it features a headless mode which means beginners don’t have to worry about learning how to pilot in a manual mode right away. It also features altitude hold which makes it easier for new pilots because they won’t have to fight against gravity as much while flying in manual mode as they would without altitude hold on board this little drone.

The Syma X5C Explorers 2 Camera Drone flies relatively slowly so it’s not the best choice for professional filmmakers or people looking to capture fast-moving action shots. However, if you’re someone who wants a simple and beginner-friendly drone, then this might be your guy!

Another great beginner option is the Parrot Bebop Quadcopter Drone. Priced at $209.97, it’s still pretty affordable even though it falls into the pricier side of beginner options. If you’ve never flown before, or if you’ve been flying for years but are looking for a quadcopter that doesn’t require FAA registration then this might be your guy! One downside to this drone is that it only lasts 10 minutes on a single charge so keep that in mind if you plan on using your drone for longer than 10 minutes.

DJI continues its reign as the top company when it comes to drones. They offer several models including the DJI Mavic 3 – Camera Drone which is made specifically for aerial photography and videography professionals, as well as semi-professional pilots who demand high-quality imagery from their flights. The DJI Mavic 3 – Camera Drone costs $2,049 but does come with more advanced features like obstacle avoidance sensors and automated flight modes including follow me, waypoint navigation, and orbit mode.

One downside? You guessed it–the price tag. At $2,049, this is by far the most expensive option on our list. Still, if you’re interested in buying one of these bad boys then you’ll get what you pay for: smoother footage and superior handling during windy conditions thanks to its anti-vibration dampeners.

Though it’s the cheapest drone on this list, the Holy Stone F181 RC Drone is actually a really solid buy. Its features include a 6-axis gyro stabilization system, a long flight time of up to 18 minutes, and a 0.3MP CMOS camera that takes decent photos and videos. If you’re looking for a drone that will last you quite a while, the Holy Stone F181 RC Drone may be the perfect fit for you.

Last but certainly not least is the DJI Mavic Pro. This drone is a bit pricey because it starts at $1,394, but if you want the best of the best, this is it.

The next drone on this list is the DJI Inspire 1. This beast is insanely priced at $2,199 and is worth every penny. Designed for commercial use, this drone has a max speed of 72 km/h and features a 4K HD video transmission that produces super sharp images. It’s also a foldable design which makes it easy to transport and store.

The next drone on this list is the Autel Robotics Premium Drone which falls into the higher end of prices for drones coming in at $1,849. But don’t let the price deter you, because the sky is the limit for this drone. This model is professional grade and has a max range of up to 3.1 miles, making it an ideal choice for photographers and filmmakers. This particular model comes equipped with an FPV monitor and transmitter, meaning you can fly while watching everything unfold through the monitor right on your controller.

Similar to the Parrot Bebop Drone mentioned earlier, another great option for beginners is the Walkera CX-10 Mini Drone. Coming in at under $50, it’s definitely a budget-friendly option for those just starting.

Factors To Consider When Using A Drone with VR Headset

There are a few things to consider when choosing a drone to use with a VR headset.

While flying a drone with a VR headset may seem like a fun and safe activity, there are some risks involved that you should be aware of.

The drone with a VR headset is a match made in heaven. The two technologies complement each other perfectly and offer a unique and immersive experience that is unlike anything else on the market. The drone with VR headset is sure to be a hit with consumers and is sure to revolutionize the way we interact with our world.

Affiliate Disclaimer: Any/all of the links to Amazon.com are affiliate links from with I receive a small commission from sales of certain items. As an Amazon Associate, I earn from qualifying purchases. Thank you!